May 5 2009
·
Written by 1
May 5 2009
·
Written by 1
Hey everyone just a shout out (sorry for the late notice) about a great event. Our friend Peter Kirkeby where we held the photo show "Loose Connections" is hosting Patrick Trefz's book release party here in SF, and I do not think you'll want to miss it- all the details are below as well as an interview with Patrick about the book from the publisher's website. 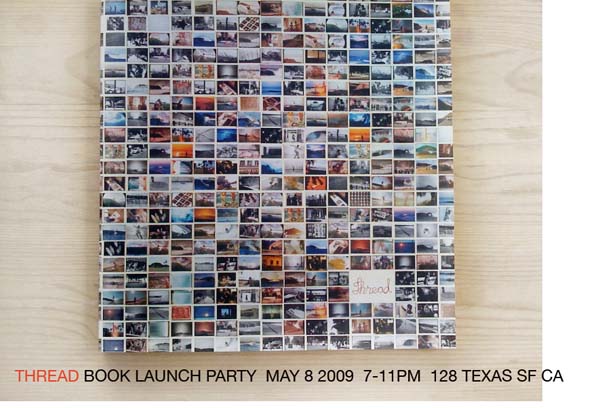 Thread is a study in juxtaposition, particularly between the man-made and the naturally occurring. Freighters in a harbor, arranged like pieces on a game board, are set against the light ruffle of wind on the water. Wheels and gears, line running through an installation like belts in a motor, the extremity of industrial production are countered by a man and a wave, two products of natural energies. Seen one way, everything is natural, and the question becomes one of degrees of manipulation. Still, the settings in these pictures suggest duality, differing realms—the road and the beach, the train track and the lineup—each element evoking its own associations. Patterned yet non-linear, Thread takes seemingly disparate subjects and gently ties them into a unified whole, finding commonality in devotion and practice. Trefz sat down with powerHouse Books to discuss his creative process.
powerhouse Books: Tell me about your background… Where are you from, and where does your interest in photography stem from?

Patrick Trefz: I spent my childhood years growing up in Düsseldorf and Paris. My first memory of cameras came from my father, who worked as a still life studio photographer. Early on, I liked the idea of getting into it professionally, so I interned for several high profile photographers. This made me realize that I wasn’t into the studio work at all—I was more into documenting and enjoying the world around me, skateboarding with friends, traveling by rail around Europe, working on my graphic doodles and graffiti—basically just indulging my creative impulses. Years of vagabonding with surfboard and camera eventually led to a job at SURFER magazine.
pHB: How would you describe your photographic style?

PT: I find that hard to describe, as it all comes from the bottom of my heart/belly region. As I daydream, I visualize compositions and scenarios. In time, when everything falls into place, the moment to realize my vision presents itself. Rolling the film camera or snapping the picture, I am totally gratified. So, I wouldn’t necessarily call it a style; it’s more of an approach. If I were pressed to define my style, I would say that the early years of working with my father in the controlled environment of the studio gave me a strong, classical foundation by being immersed in aspects of formal composition. As I mentioned earlier, I was compelled to explore the world. Thus, I believe that I brought this formal sensibility to the streets and beaches of everyday life. Over time it evolved into introducing a view to the surfing genre that was typically found only in the realm of what was considered fine art photography.
pHB: Is this a style you’ve developed over time, or was it something particular that you had in your mind when you first started shooting?

PT: When I was 15 I took my first solo trip—to Tunisia. I roamed the country by train, bus and foot, hungry for the experience and culture, overturning every stone in sight. There was a certain spontaneity and innocence to it that is hard to find these days. I’d have to say that my original intent, curiosity, and zeal has and will remain a driving force.
pHB: Who or what inspires you and your work?

PT: I am inspired by the new and unknown, a country or city I haven’t been to, an artist or musician I haven’t heard off, finding a new hiking trail in the woods behind my house—an unending fascination with discovery and exploration. This also applies to surfing and waves: each wave that breaks is unique and you have to be alert and observant to deal with the constant change. I like how that idea is applicable to the endless transformations within every day life.

pHB: The book Thread is based on an award winning, 16mm film that you directed… Talk to me about these projects, what themes do you explore through them?

PT: Thread is based on a common creative thread that a group of surfers share, showcasing a different aspect of our culture, away from the boobs and tubes stereotype. The main theme revolves around the idea that the lines that these surfers draw onto the waves translate into their artistic pursuits on land. For example, Jim Denevan is highly dedicated to producing land art on low tide beaches that vanishes with the incoming tide. Joe Curren explores his roots via photography, whilst Tom Carroll gets into the science of shapes and experimental fin design.
pHB: Is there a photograph in your book that you consider a personal favorite of yours, if so, which one and why?

PT: It is the opening shot of the book: Patxi Oliden, autodidactic surfboard shaper from the Basque country. A genuine man who has been surrounded by the sea his whole life, he was originally an oar shaper for the whaling fleets from Orio. When Californian surfers arrived at the coast for a visit, he taught himself how to shape in order to supply the hometown kids with inexpensive surfboards. His company, ‘itxastresna’, directly translated from Basque, means ‘Democratic Surfboard Company’
pHB: Thread follows you on your travels all over the world in search of the surf… Describe some of the experiences or the memories that stand out the most.

PT: The surf is the icing on the cake and the time spent traveling to it makes for such rich experience. The different people and places that led me to the final product of the film and the book were incredible: surviving a 10 hour taxi ride from hell from Athens to Corfu, getting stuck and crazy sick in a massive sandstorm on an island off the Saharan coast, drinking Rioja with my Basque friends in their family winery that dates back to 1150 A.D., collaborating with musicians on the soundtrack, and spending 2.5 months in the Chelsea hotel whilst editing in NYC. This is certainly an abridged list, as there were many, many more.

pHB: What are some of the greatest challenges that you face as a surf photographer? How do you overcome them?

pHB: Do you prefer shooting on land or in the water?
PT: Whatever it takes, really: from land, swimming in the pit of a wave, riding a surfboard with the camera, from a canoe, boat, jet ski, helicopter, or plane.
pHB: And lastly, what does the future hold for you and your work?
PT: I have been tracing and shooting Steinbeck’s legacy in the Salinas Valley for the last few years with my trusty 6by6 Rolleiflex. A book is in the works. Since digital still cameras have evolved to also shoot motion, I will be able to work with more freedom and spontaneity, rather than having to shift from one piece of equipment to the other. Right now I’ve got a new project is in the works entitled ‘Steeped’. It is about the refinement of the aging surfer. I am also working on a script for a narrative feature about a Sinti that fled from Nazi Germany to the woods of Northern California.