This past rainy Friday morning I got some coffee and had a chance to sit down with my neighbor the surfboard maker Danny Hess. We talked a little about his trade and loosely what lead him to it, and of some recent adventures in his life. Danny makes beautiful, (beautiful is not overused here) surfboards out of a combination of EPS Foam and sustainable woods such as Poplar. Please refer to his site to better understand his unique approach to board building, because during our chat we do not go into great detail- click HERE.

Our talk, and the viewing of many of his surfboards in various degrees of production, left me feeling really amped. It pulled my head out of the monotony of my surf retail routine and got me excited about being in the water, trying new templates and materials, new feelings and approaches to surfing, which is essentially the reason I�ve worked in surf shops a majority of my life. The below is a rookie interviewer�s attempt at transcribing our discussion. 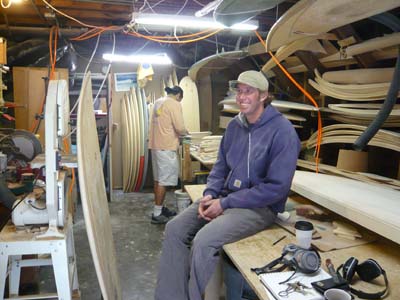 Danny and Lyle in da shop.

Danny how did you start to work with wood and get into the trades?

My father fixed what needed fixing, so I learned by watching and assisting him. He built our house and thus my introduction to woodworking. Much later I moved to Colorado with Erin (Danny�s Wife) and worked as a laborer on houses. Erin and I designed and built our own straw bale house, which we lived in for a year and which got me really inspired and focused on Green Design. From there we got to travel through Europe living in Spain and Portugal for the better part of a year where we then returned back to the Bay Area. Upon my return I started to build tree houses, for kids, parents, even a yoga studio and an art space. This was such rewarding work, I mean I got to meet with kids and have them define their dreams, then translate them into architectural drawings and plans so their dream could be reality. I focused on reuse, utilizing re-claimed building materials and recycled items which continued to foster my interest in Green Design. A big problem became apparent as this work began to become popular and consistent for me- how was I to translate this into a legitimate business? There was no way I was aware of to get the proper permits let alone a contractor�s license to build tree houses, so I had to step away from it. So I went back to school for two years to pursue a Masters in Sustainable Design.

So how did these skills evolve into the building of surfboards?

I was always building my own surfboards, partly because at the time the templates I was interested in, quad fish and the sort, were hard to come by. I started by using routine materials but as with my trade�s work, I wanted to be thoughtful with resources, so I started applying that mindset to the building of surfboards. The goal was to combine different materials to get the right �designed flex�, performance, lightness, and durability. To end up with high performance boards that were built to last, surfboards you pass on much like you would pass on an object such as a well-made guitar for continued use and enjoyment. 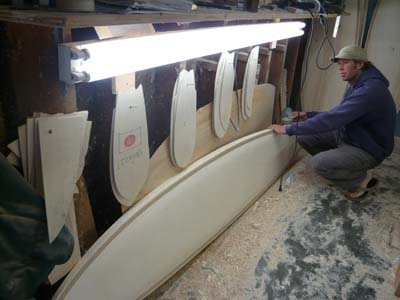 Danny and a twin fin gun he is currently working on.

The First board took over 120 hours to complete, 40 of which were spent on creating the molds which forms the perimeter rails, which give the boards their rail outline, foil and rocker. The first 30 boards had wood frames supporting the core of the boards, which made for boards that worked well but were a little too heavy and rigid. From there, determined to have minimal resource impact yet give the board a high standard of performance I started to explore using an EPS core with the wooden perimiter stringer and deck materials.

Please summarize this combination of materials and the benefits of them. (Remember to check Danny�s site mentioned in the introduction for more info).

I use Amaploa, Cork, and Poplar for the perimeter rails and the wood skin for the deck and the bottom. And EPS for the core of the board. The EPS core is recycled content foam
which a plant in the East Bay produces by chopping down old Styrofoam and blowing it back into new blanks. Then the board is sealed with 4 oz fiberglass and epoxy resin.
I am very convinced that currently this is the best combination of materials in terms of the best combination of performance, longevity and quality, but I will continue to evolve and explore so I can offer multiple technologies and feels, one of which will be a completely biodegradable surfboard. So I am very excited about evolving the tech and am currently working on some exciting projects that I am not quite ready to talk about.

Let�s talk briefly about parabolic rails, I�ve had a couple parabolic boards that felt snappy when hitting the lip but really seemed to bog in down-the-line conditions. How are your perimeter rails different?

They are very different in that the perimiter stringer I build gives the board its outline, foil, rocker and strength. It also gives the board its engineered flex, and eliminates torsionial twist, which causes other boards to loose forward projection. The parabolic stringers on the boards you mentioned are under-built, these boards have to rely on heavier glassing to try and get the board to have positive flex characteristics- these materials loose their return flex overtime and the boards loose their lively feel. The perimiter stringer on my boards give the boards performance flex, strength and support, so I do not have to rely on a heavy glass job, we glass them very light to basically just water seal them. Even better these materials keep their flex, so you have a board that keeps its performance properties. 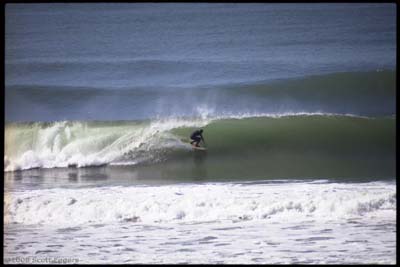 What are some shapes/templates you have been really excited about lately?

I have had the good fortune to be working with Dick Brewer. To take his 50 years of shaping experience and to be translating into my way of working and technology- feels like someone gave me a big learning pill. To be able to dissect Brewer�s big gun expertise has me very inspired, and Brewer being an engineer is excited about this integration of materials. This 10�6 Brewer Gun is the best board I have ever built! 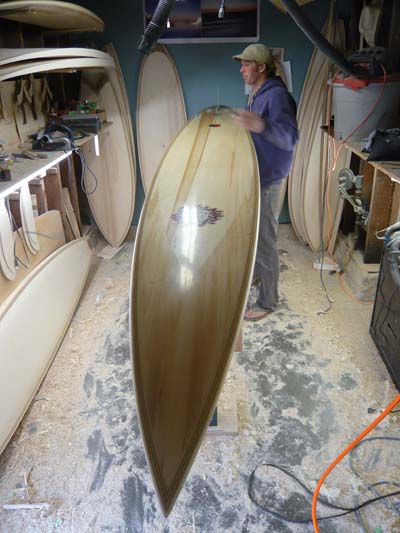 A boy and his favorite gun.

The Singer is a snazzy looking performance quad that you collaborated on with the artist Thomas Campbell, tell us a little about this collaboration.

T-Moe and I love Rich Pavel and Lyle Carlson quad fishes, and we wanted to take such a template and make it so it surfed a little more progressively, more in the pocket type of surfing. So the Singer is designed to bridge the gap between a performance thruster and a 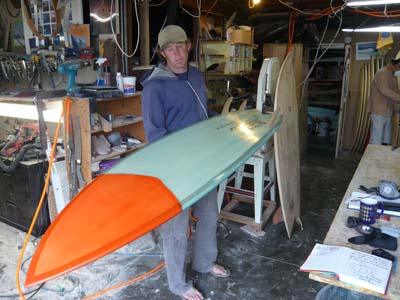 quad fish. Allowing one to take a familiar quad fish line in steep drivey waves, a quad fish that fits that type of wave. The color jobs resulted from playing around with different resin tints glassed over drawings that T-Moe draws directly over the board with graphite 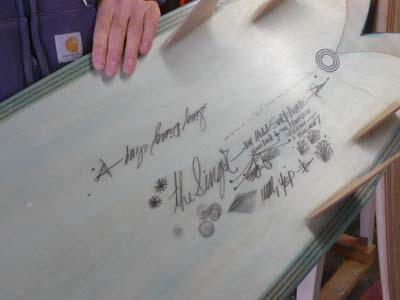 Some rad T- Moe scribbles in graphite along the Singer's bottom

I really like how the color works with and does not overpower the beautiful patterns from the wood grain. Speaking of T-Moe, everyday in the shop I have people asking me about his new film project- THE PRESENT, you have been on trips for the film, how did this come about?

T-Moe has been interested in the way I make surfboards, and one of his repeat athletes, Dan Malloy has been enjoying surfing my boards, so going to Indonesia with them for THE PRESENT was a way to showcase how this technology works in epic Indonesian waves. Thomas has filmed me often at work making boards and one day he called me and invited me on an Indonesian boat trip with Dan Malloy, Ry Craike, Chelsea Hedges, Sofia Mulanovich and Mike Stewart. We ended up getting some of the best waves I have ever seen, the longest craziest barrels I have ever witnessed. I was humbled by these athletes level of surfing.

I was also humbled by the positive feedback I received from these high caliber riders in perfect waves, as to how my boards preformed and where to refine them. The constructive critiques from these sessions were amazing for me.

You have been on two trips to Indonesia with T-Moe and crew now, tell me the general routine. 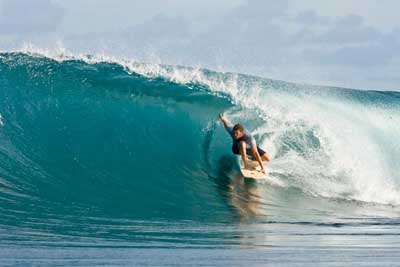 Danny in Indo filming for THE PRESENT

Making a film was the goal of the trips so we were on a schedule according to proper lighting and the other elements required for optimal surf filming conditions. Everyone was very professional and humble. The work environment was efficient and effective with straightforward directing from T-Moe.

Other impressions from the trips?

To get the chance to surf with professional surfers in epic waves was like being sent off to advance surfing camp, when you surf regularly with such advanced surfers this natural progression starts to happen.

On one night after dinner, Ry straight jumped off the boat for a night session, we soon joined, having the boat anchor so the lights reflected about the form of the waves; we adorned ourselves with light sticks and had so much fun! Several nights were clear enough for us to indulge in such night sessions.

But what positively blew my mind happened on the second trip- the incredible rides I witnessed going down on Tom and John Wagner�s alaias. I don�t know if you have tried one, but they are incredibly humbling. They are hard to paddle, they do not float well so it is very challenging to catch a wave, you�re wave count ends up being a 10th of what it normally is. You also surf them very differently, feet close together, you kind of surf the board from the middle- let me say they are very hard to surf without a lot of practice. These surfers were getting some of the most intense long barrel rides I have ever witnessed on alaias! Taking off deep under the lip and just going so fast through long barrels, I cannot wait to see it in T-Moe�s film, it is going to blow your mind too!
THE PRESENT is going to be a beautiful film redefining the many different approaches to surfing. I�m very honored to be a part of it, and I can�t wait to see it.

I�ll state here that the film is going to be shown March 28th at the Victoria Theatre.
What should we talk about now- oh let�s talk hand planes. 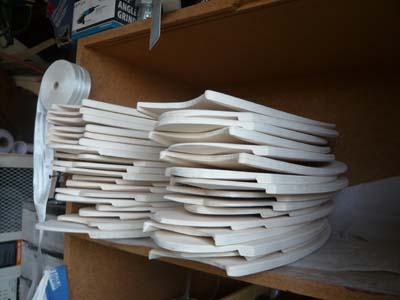 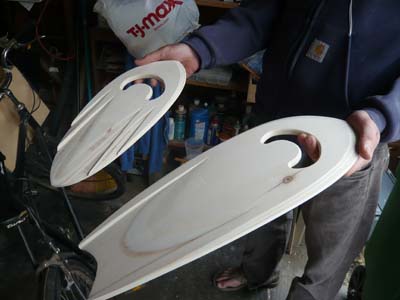 The hand planes are so fun. I make them from my left over-cuts from the surfboards. We have been working on all kinds of bottom contours, rockers, tails and channels but have recently evolved it down to 5 great working templates. These hand planes are a little longer- long enough that you can place your weight down through your elbow, this lets you plane much higher in the wave allowing much more maneuverability and speed. 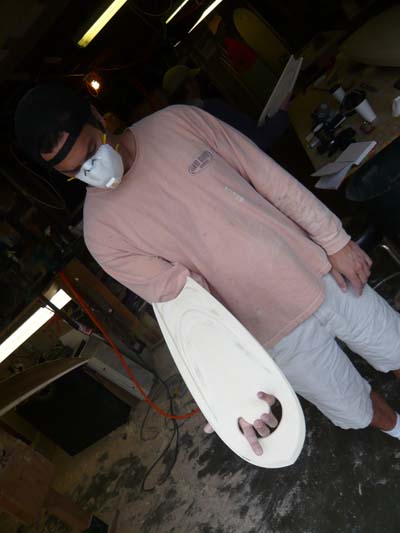 Lyle showing the length, tail and channels of the Kamikaze template.

It feels like bodysurfing yet the speed and control you maintain in the barrel is simply amazing! Dan Malloy sums it up by saying, � I�ve had some frustrating times surfing, but I�ve never had a bad time bodysurfing.� You�ve just got to go try them with me. 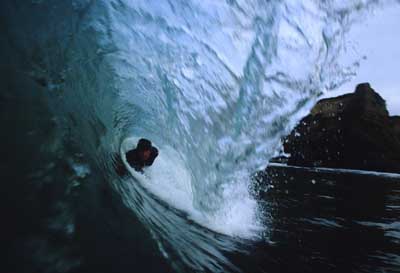 Danny Planing on thru
I�m amped! Thanks for your time Danny. Visit Danny at hessurfboards.com